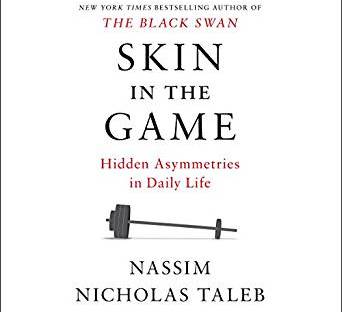 Blame the failures on luck.

This is the central theme of Taleb’s new book – Skin in the Game – or avoiding asymmetry between risk and reward.

Naive actors – I’m sure most people (including me) have done this at some point in their lives because it’s the easy way out and the ego remains unscathed. I’ll make my case for why this should be avoided at the end of this piece.

Evil actors – In other cases, systems are gamed such that there is asymmetry between risks and rewards.

Let’s look at some of the consequences of this seemingly innocuous phenomenon that is pervasive in society, in organizations and in our personal lives.

“The Bob Rubin trade? Robert Rubin, a former secretary of the United States Treasury, one of those who sign their names on the banknote you just used to pay for coffee, collected more than $120 million in compensation from Citibank in the decade preceding the crash of 2008. When the bank, literally insolvent, was rescued by the taxpayer, he didn’t write any check – he invoked uncertainty as an excuse. Heads he wins, tails he shouts ‘Black Swan’ [1].”

[1] A Black Swan event has the following attributes – “First, it is an outlier, as it lies outside the realm of regular expectations, because nothing in the past can convincingly point to its possibility. Second, it carries an extreme impact … Third, in spite of its outlier status, human nature makes us concoct explanations for its occurrence after the fact, making it explainable and predictable.”

“… Employees accept blame but only in inverse proportion to their self-perceived status. Due to the murkiness of collective responsibility … self-perceived status is the only available basis for dividing up blame or credit. If everybody believes they are above average (Lake Wobegon Effect [2]), they will assign more blame to others and less to themselves, and convince themselves that their partitioning of the blame is fair.

If each person’s culpability for a failure is taken at their own evaluation, you will have a net-deficit in the total accounted-for-blame. Conversely, with a success, the sum of self-perceived credit attributions is greater than the credit actually available to go around…”

Blame that goes unaccounted for accumulates as organizational dark matter eventually leading to a blowup. (paraphrased)

“But not to worry, if we do not decentralize and distribute responsibility (of blame) it will happen by itself, the hard way: a system that does not have a mechanism of skin in the game, with a buildup of imbalances, will eventually blow-up and self-repair that way. If it survives.”

– Taleb, Skin in the Game

[2] The Lake Wobegone Effect – a slight (but interesting) diversion here.

The Lake Wobegon effect, a natural human tendency to overestimate one’s capabilities, was coined by Professor David G Myers in honor of the fictional town. The characterization of the fictional location, where “all the women are strong, all the men are good looking, and all the children are above average,” has been used to describe a real and pervasive human tendency to overestimate one’s achievements and capabilities in relation to others. There’s considerable research that shows self-reported averages are higher than actual averages – exam scores, height, income, the whole gamut. Everyone likes to believe they are “special”.

And finally, at the personal level, absence of skin in the game, evading personal responsibility, or externalizing risk and blame, is one of the main reasons why we don’t grow as individuals.

It is easy to shrug off responsibility and claim it was bad luck, but the real learning lies in accepting and examining why things went wrong.

I know of only one organization that has tried doing this at the organizational level – Ray Dalio’s Bridgewater Associates where brutal honesty and radical transparency reigns. It’s manifestation – Baseball Cards for each employee. Whether this is sustainable in the long run remains to be seen.

The key takeaway here is that accept reality as it is and move on. Avoid delusions, stories concocted by the mind, hidden risks, that will blow up in your face someday.

View all posts by Rahul R