I turn 25 on Monday (30th November). It’s been a stressful year, the pandemic notwithstanding. My biggest concern? Myself. I’ve been shouldering the weight of my own expectations, grappling against the passage of time, turning 25. I don’t think I’m alone.

An interesting phenomenon I’ve been cataloging over the past few months is that of age anxiety. You will see teens and young adults prominently showcase their ages on social media. Why? Signaling precociousness.

This tendency declines sharply with age. You will see lesser people showcase this as you move upwards and once you reach 25, you’ll notice it disappears entirely from public facing profiles. In fact, as people get older, many will go one step further, removing birthdays and even the years they attended university from their profile to avoid being found out. Why?

A few answers in the thread, although written in jest, tell us why.

Most people between the ages 20-30 will have to come to terms with expectations they’d set for themselves as kids. Or worse, cultural expectations, often anchored at exceptional outcomes. Here are a few examples as seen in the wild of how this affects people.

Even though I’ve personally never displayed my age explicitly on social media, I’m aware of it subconsciously, and get reminded every time I see someone who mentions it. Discourse about gifted kids, exceptional achievements at a young age, and age gatekeeping is pervasive these days and difficult to avoid. The fetishization of youth and unrealistic expectations most kids grow up with has made this a ubiquitous phenomenon, especially in circles that place high value on achievement and image, e.g. middle class, upper middle class, elite universities, etc.

Depictions in pop culture reinforce these ideas. This image is from FRIENDS, a show which inspired essays like “How a TV sitcom triggered the downfall of western civilization“

It shows Joey, one of the main characters of the show lamenting his fate and cursing God as he turns 30. Mind you, this episode of FRIENDS, arguably one of the most popular TV shows in history, aired in Feb 2001. We’ve been at this for a long time. Narratives crystallize, peak and then fade away. We might be close to the peak, however. 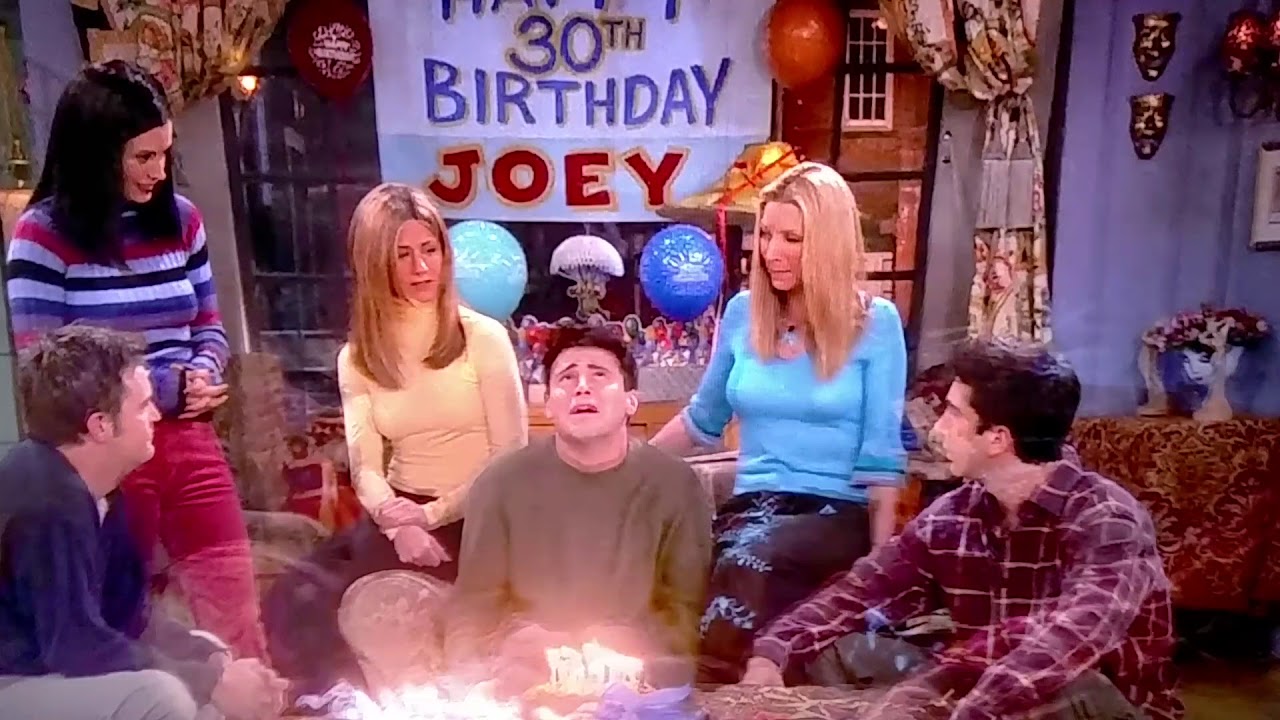 Lists like the Forbes list may be close to or past peaking in their relevance and prestige but the meme will persist. The 30 under 30 list is three to five times as popular as the 40 under 40 list. This is not an aberration. Notice how quickly they moved to 30? There is downward pressure on this absolute number, and in my estimate this is currently trending below 25, perhaps at 22/23.

The quarter life crisis phenomenon has gained considerable attention over the past two decades. It is now a feature of most people’s lives. However, there’s more to this phenomenon.

This is my estimate of how age is distributed in bios on social media based on a quick 10 min exercise. Look at the precipitous drop at 25.

Side project idea: Parse a random, large sample of Twitter/IG profiles and extract ages from bios. Plot the frequency distribution of ages mentioned. The mode is where the quarter life crisis exists culturally.

I looked at articles written on QLC over the last 10-15 years. A few examples:

The quarter life crisis is going to end up at 20 sooner or later and the kids are not going to like it.

The nature of this crisis is described well by Visa.

This is an expectation crisis. The gap between expectations you’ve accepted and your reality needs “managing”. Everyone deals with this differently but what’s common is the time people spend in a liminal phase, a void. A period of time which can extend anywhere from a few weeks to a few years where beliefs, needs, image are re-evaluated.

Nick has a good tweet here about the void, a phase after the quarter life crisis (his estimate ~24) where people search for love, meaning and identity beyond their precociousness and abilities.

A former X under Y agrees.

@kipperrii has a couple of good tweets on this

For those that missed the title’s reference, it’s a callback to vgr’s brilliant article titled Immortality begins at 40. It theorizes various life stages across eras and explains the significance of the number 40.

“A very general life-stage map across civilizations and eras looks like this:

“In the scheme above, 40 is the only roughly stable number. It exists as an approximately fixed point because it is an emergent outcome of history. It is reflected in the nature of humanity’s collective cultural archives, religions, sitcoms, ideologies, self-improvement plans, justifiably ageist 40-under-40 award schemes, weight-loss plans, and dating advice.”

“Once society stops doing culture to you, and you’re on your own, immortality begins. The morning after your fortieth birthday, you experience the first day of the rest of time.”

“Forty is also the age at which point it stops being worth anyone’s while to manufacture and invest meaning in you. It is this drying up of supply — meaning, by virtue of its transience is a consumable — more than any maturation into nihilism, that triggers the shift into an immortal frame of mind.”

I posit that α is when invisibility begins. The limelight stays fixated, on teens and young adults who have achieved exceptional outcomes. People start leaving you be, you start moving towards invisibility and are forced to come to terms with expectations you’ve assumed.

You can exert agency and choose the games you want to play.

What comes next? I don’t know. Still in the void. I’ll see you next year.

And before you take this too seriously, here’s my disclaimer 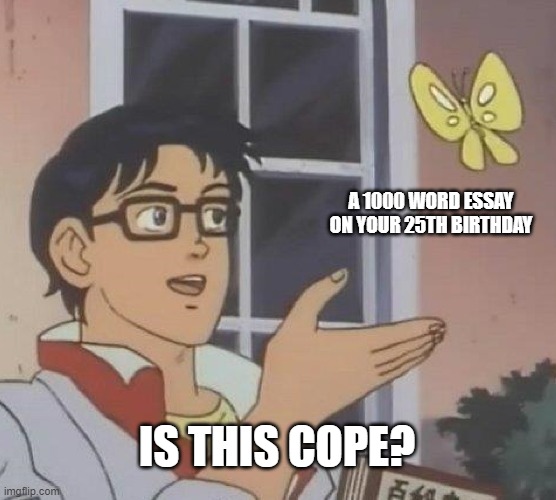 A clumsy, hard fall on the rough hotel room floor left me with scraped knees and a short but distinctive spell of embarrassment. A few days later when the raspberry scab was fully formed it triggered a flurry of memories from my childhood. Scraped knees are a part of every kid’s childhood and it all came rushing.

Kids partake in risky activities all the time and I was no different. Playing on uneven ground, running from strays, jumping over fences, climbing walls, hiding in the bushes and countless other escapades. That’s a lot of scraped knees.

Scraped knees become a distant memory after you enter adulthood. This last incident happened in a foreign country, far away from home, in a new environment. I’ve been in the US for only 3 months. The similarities between trying out new things as a kid risking scraped knees and adjusting to new ways of living by making a fool of yourself repeatedly became acute after this minor mishap.

During the time I was planning the trip, I was told by colleagues and friends how difficult it was for them to adjust in a different country. All of them cited the inability to develop/maintain new relationships and fundamental differences in ways of living as barriers to adjustment.

I don’t feel like this, so far. What explains this? An above-average sense of familiarity with the culture, my below-average need for people and relationships, the presence of a handful of acquaintances in every city I’ve been to (thanks to Twitter) and the transient nature of this gestation period where everyday life is defined by a lack of routine rather than a fixed set of rituals are all good candidates. These can explain some of it but here’s the kicker – the courage to ask and being open to experimentation and failure.

When I reflect on the past three months, I now realize why many people find the transition difficult. Adjusting to a completely new set of rules – both spoken and unspoken is hard work. It also comes with the risk of being outed as an outsider or feeling embarrassed at each juncture.

I’ve struggled with the simplest of tasks – how to engage with strangers, where to find napkins at a restaurant, how to order a meaningful, tasty salad and not 10 random things mixed together, how to hold a glass of wine, hell, how to pronounce their names? Even basic etiquette relating to tipping, holding the door, greeting people and walking on the street needs learning. Interfacing with a new environment brings out the inner child in you and kids are excellent at learning via mimicry. This is a humbling experience in adulthood. Scraped knees and bruised egos take longer to heal.

People moving to new cultures fall broadly into two categories – ones who stay among themselves and look for their communities and those who engage meaningfully with reality on a daily basis, trying to integrate in an accelerated manner. It largely comes down to whether or not you want to change and more importantly, if your being is amenable to said changes.

There is no correct answer here but the latter can be fun if you stop taking yourself too seriously. It’s okay to fall sometimes.

An interesting sidetrack here is that of folkways (a unit of social analysis or “ways of being”) on Ribbonfarm titled The Missing Folkways of Globalization. It talks about globalization and its effect on the social landscape, describing how people adapt or adopt in new environments.